The Northern Ireland Longitudinal Study, ONS Longitudinal Study (England and Wales), and Scottish Longitudinal Study include a vast range of data relevant to many different types of research question. Their combination of administrative, census and health data across time make them a rich and unique set of resources. Examples of the types of research enabled by these features of the LSs include: The role of subject choices in secondary education on further education studies and labour market outcomes and Population characteristics of stigma, condition disclosure and chronic health conditions.

As an exploration of the many ways in which the LSs have been used, CALLS have conducted an analysis of the journal papers produced by LS researchers.

This citation analysis demonstrates the impressive range of academic fields to which LS-based research has contributed in the last 6 years. Research featured in almost 60 journals, and spanned more than 40 Scopus subject categories.

Research based on the LSs is regularly published in top quality international peer reviewed journals such as Demography, the International Journal of Epidemiology and Population, Space and Place. Fifteen papers in the citation analysis were published in journals ranked within the top 5 for their field (articles ranked by SJR Impact Rating for the relevant subject category in the publication year).

Papers had excellent citation rates indicating the acknowledgement of the unique contributions LS data offer. Papers published within the last 2-3 years were amongst the most highly cited. Eighteen papers had been cited 10 or more times.

The subject areas of papers using the LSs reflect the strengths of the data that they offer: SLS and NILS had a higher proportion of health-related papers, likely due to their excellent linkages with health data. Looking at subject categories for the LSs also reflect these variations: whilst the categories were very similar, ONS LS’s top 5 included ‘Demography’, whereas the SLS and NILS included ‘Health(social science)’.

Overall the analysis shows the valuable contribution of the NILS, ONS LS and SLS to a diverse range of academic fields including medicine, demography, geography, economics, business, psychology, environmental science and more.

Although we only focus on publications in academic journals here, LS research has considerable impact in other formats such as briefing notes, books and presentations to government, and has also formed part of a variety of PhD Theses. The full list of outputs can be explored in our Outputs database.

The raw data for the analysis can be downloaded at the bottom of this page.

Using the CALLS Hub outputs database a total of 106 published papers from the period January 2010 – May 2016 were identified from the three LSs. It should be noted that whilst CALLS and the RSUs actively solicit LS users to record all outputs, and also conducts literature searches to maximise capture, it is possible that some further papers exist.

All papers published in journals or regularly produced official publications – such as ONS Population Trends – were included. We did not include working papers in this analysis. Citation counts were gathered from Scopus, taking the final counts as of 30 June 2016. Impact Factors were taken from the Scopus project SCImago using the SJR2 indicator.

Of the 106 papers identified, 16 were from non-peer-reviewed journals such as Population Trends. Four papers used more than one LS for their analysis. (see figure 1) 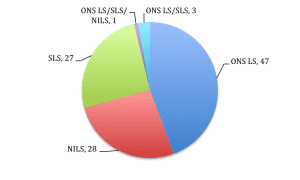 Papers from the three LSs were published in a total of 59 different journals, spanning 41 SCImago Subject Categories in 11 Subject Areas (figure 2). SJR Impact Factors for the papers ranged from 0.128 to 9.893, with an average of 1.577. 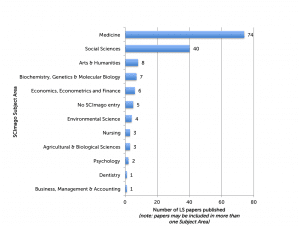 The 5 most frequent subject categories for LS papers were:

The ten most cited papers from the three LSs were:

During the period January 2010 to May 2016, a total of 29 journal papers were found which had used NILS data, including one paper which had used all 3 LSs. Five NILS publications appeared journals with top-5 ranked impact factor.

NILS journal papers were published in 18 different journals, spanning 8 SCImago Subject Areas and 22 Subject Categories (see below). SJR Impact Factors for the papers ranged from 0.219 to 4.381, with an average of 1.632. 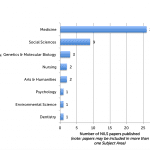 The 5 most frequent subject categories for NILS papers were:

The 10 most cited NILS papers were:

During the period in question, 51 journal papers were identified as having been produced from ONS LS projects (including 4 papers which also used other LSs). Of these, 14 appeared in non peer-reviewed journals. Seven papers appeared in top-5 ranked journals.

ONS LS papers appeared in 33 journals, and covered 20 SCImago Subject Categories in 7 Subject Areas. SJR Impact Factors for ONS LS papers ranged from 0.128 to 9.893 with an average of 1.453. 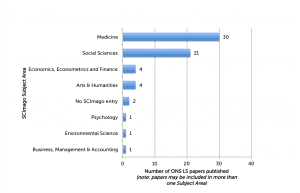 The most frequent subject categories in which ONS LS papers appeared were:

The most cited ONS LS papers were:

During the period January 2010 – May 2016, 32 SLS-based journal papers were identified (including 4 papers which also used other LSs). Of these, 2 appeared in non peer-reviewed journals. Three papers were published in top-5 ranked journals.

The SLS papers were published in 26 different journals, spanning 23 SCImago Subject Categories in 8 Subject Areas. Impact Factors for the papers ranged from 0.226 to 5.667, with an average of 1.6. 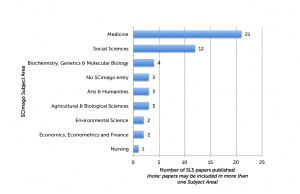 SLS papers appeared most frequently under the following subject categories:

The 10 most cited SLS papers were:

On Friday 18th March we held the largest of our UK LS Roadshows to date and we hope the audience enjoyed the day as much as we did.

On Nov 10th, our UK LS Roadshow moved to Bristol as part of the ESRC Festival of Social Science.

The first part of our Roadshow showcased some of the different types of research that the ONS LS for England & Wales has been used for, and you can download the slides here:

On October 26th and 28th CALLS Hub hosted two exciting roadshow events in Aberdeen and Glasgow to promote the UK Census-based Longitudinal Studies. The events were well attended and feedback from the audience was very enthusiastic! It was great to be able to share our excitement about the potential of the datasets.

The first part of our Roadshows showcased some of the different types of research that the Scottish Longitudinal Study has been used for, and you can download the slides here: 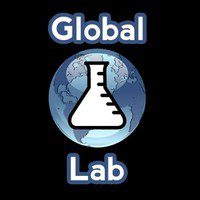 On Thursday 6th March 2014 CALLS Hub organised a very successful launch event to mark the linkage of 2011 Census data to the UK LSs on behalf of the LSs, ONS, NISRA, NRS and ESRC.  This was held at Church House, Westminster, and over the day a total of 120 people attended.

A special morning event was introduced by Prof Paul Boyle (CEO of ESRC), and the linkage officially announced by Sir Andrew Dilnot (Chair, UK Statistics Authority).  We were honoured to hear how highly regarded the LSs are held.

We recommend clicking the button in the bottom right corner to view full screen. You can also view the Prezi at Prezi.com